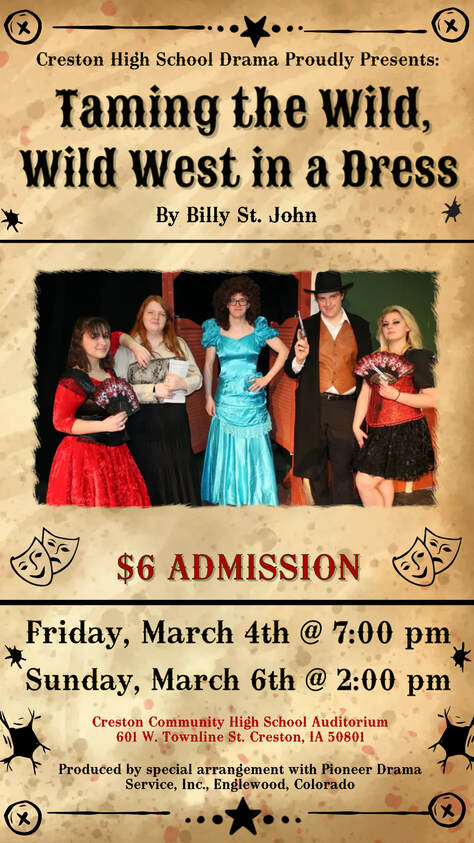 The Creston High School All School Play will be Taming the Wild, Wild West in a Dress by Billy St. John. The comedy ​will take place on March 4 and 6th, 2021, so mark your calendars! Admission is $6.

SYNOPSIS: "It’s hard to be a hero when you’re wearing a dress, but young actor Clarence Rawlins manages to do just that (and a lot more!)  in this action-packed Western comedy.  Clarence and his theatre company head west to Lucky Lady, Nevada, where Clarence discovers that he has misread his distant aunt’s handwritten will.  Thinking he was inheriting a profitable saloon where his acting career might flourish, he was actually bequeathed the Lucky Lady Salon, a beauty parlor.  Flat broke, Clarence has no choice but to raid the costume trunk and transform himself into a down-on-her-luck British aristocrat, Lady Claire Rawl, now head hairstylist of the small town’s only salon.  His pal and fellow actor, Roger Gaines, becomes a French stylist, Rogaine.  Together with the ladies in the troupe-Heidi Gray, Bobbie Pinz and Nell Clipper-they re-open the beauty salon to great success.  But their good luck runs out when, unbeknownst to them, two crooks plot to acquire Clarence’s salon as part of a scheme to rob the bank next door.  Filled with hilarious characters and classic Billy St. John puns, you’ll ’dye’ laughing at this wild western tale.  The Old West was never any wilder-or more fun!"  Link to the Publisher's Website
All School Play Cast List
Picture Archives:​